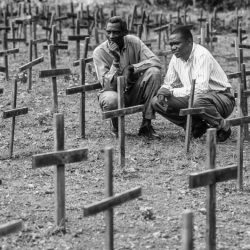 After the genocide event, there are voices of remembrance by generations of past survivor. The victims live with trauma of the experience which is passed on to following generations of survivors. In this hour we discuss with scholars how these events affect individuals, groups, nation states and all of humanity. What does acknowledgement and commemoration mean for Genocide Awareness and Justice? [ dur: 58mins. ]

Dr. Stephen D. Smith is Finci-Viterbi Endowed Executive Director of the USC Shoah Foundation, is committed to making the testimony of survivors of the Holocaust and of other crimes against humanity a compelling voice for education and action. He has authored many articles including The Memory Generation: Sidney Bernstein is the reason we know what the Nazi concentration camps looked like. He is the producer of Shoah Foundation’s podcast called the Memory Generation.

Maria Armoudian is Senior Lecturer on Political Science at University of Auckland. She is the author of Reporting from the Danger Zone: Frontline Journalists, Their Jobs, and an Increasingly Perilous Future and Kill the Messenger : The Media’s Role in the Fate of the World. Her recent article The big lie about the Armenian Genocide published by New Zealand Herald.

Dovile Budryte Ph.D, is a professor of political science at Georgia Gwinnett College. Her areas of interest include gender studies, trauma and memory in international relations and nationalism. She is the author of Taming Nationalism? Political Community Building in the Post-Soviet Baltic States and co-editor of Memory and Trauma in International Relations: Theories, Cases and Debates.