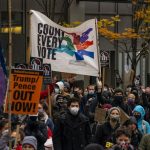 Was the election conducted properly? Will mail in ballots be counted and will that count be allowed to stand? Will the US Supreme Court decide the final outcome? And what, in any case, will become of American democracy? In this urgent and timely event, University of Auckland lecturers will use the lenses of law, political science, and psychology to explain this contested election and discuss the implications of the final outcome. This is a recording of the panel gathered at University of Auckland Law School on November 18th, 2020.