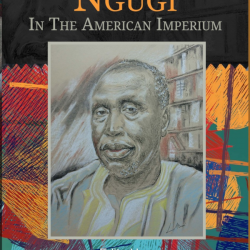 David Lloyd speaks with the world-renowned Kenyan novelist, playwright and poet, critic and widely influential postcolonial theorist, Ngũgĩ wa Thiong’o. They explore the problem of colonization of languages, his commitment to writing in his native language, and his incarceration and exile for political dissidence. And with the panel they discuss a new book of essays on his work, Ngũgĩ in the American Imperium. [ dur: 58mins. ]