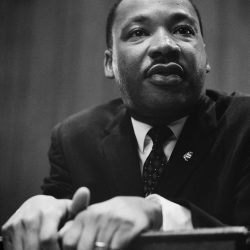 To commemorate the birthday of Martin Luther King Jr. we discuss Dr King’s life, his work, his legacy and his memory. We then explore the impact of Dr King and his memory on contemporary issues, including the role of women on the movement and the security of people of color as embodied in the Black Lives Matter movement. What is the meaning of Dr King’s dream today? [ dur: 58mins. ]