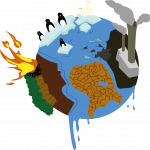 Western US is ablaze with intense and widespread fires. What role does climate change, forest management, overpopulation, and resource management play in the increasingly devastating fire seasons worldwide? How can climate mitigation and adaptation complicate forest management? [dur: 58mins. ]