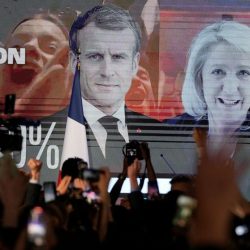 The French are electing a new President. On today’s show we explore French politics and society and the potential of a French election of a far right candidate as President. [ dur: 58mins. ]

On April 10, 2022, French voters went to the polls for Presidential elections. Like so many countries, the first round of elections are multi-party. If no candidate receives 50% of the vote, then a second round of elections is held with the top 2 finishers. In a repeat of the 2017 elections, Emmanuel Macron received the most votes but fell short of the 50% threshold. He will once again run against National Front candidate Marine Le Pen. This election will be held April 24. What is at stake is French participation in the European Union and NATO. French identity is at stake as well, with Le Pen’s well known white nationalist appeal to French voters. We will discuss political and social developments in France, and what we are watching in the outcomes on April 24.