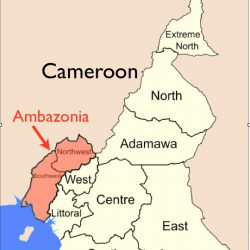 Cameroon is a West African nation that is embroiled in a civil war between its Anglophone and Francophone populations. What led to this civil war? and how can it be resolved? We explore the causes of the war and the prospects for resolution. [ dur: 36mins. ]

Protests against violations of federalism agreements were met with state led violence in Cameroon. What were the impacts? We’ll hear from one of the organizers.[ dur: 22mins. ]