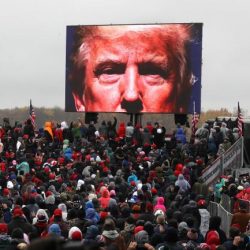 The mob seizure of the US Capitol this week has raised several concerns about the future of American democracy? Was this a coup attempt? Is this beginning an era of undemocratic actions against peaceful transitions following elections? And is the Trump Presidency an anomaly to American democracy? [ dur: 27mins. ]

This program is produced with generous contribution from Ankine Aghassian, Melissa Chiprin and Sudd Dongre.